Cystic Fibrosis - deluding myself with statistics


Our son Finn had cystic fibrosis (cf). He was meant to live until he was 47. More precisely that’s the median life expectancy in the UK according to the cystic fibrosis trust. What that actually means is that half of people who have cf will live beyond their 47th birthday, how far beyond is anyone’s guess. That’s how it’s always written, no-one likes to point out that half of all people in the UK with cystic fibrosis will not make it to their 47th birthday. Obviously our Finn was meant to be in the good half, so it was a comforting statistic to know.

I would generally consider myself a lucky person, things fall on the right side for me, always have. I landed in a good family, had an idyllic upbringing in a nice house with dogs that didn’t need a lead. My exam results were always on the right side of average, I went to uni, fell in love with the first guy I met, got my PhD, landed my dream job, married Paul and life was perfect. My first uncomplicated pregnancy and beautiful son were the culmination of everything perfect in my life and there was no reason to assume Finn’s life wouldn’t be the same.

The system broke when Finn was born with meconium ileus, it broke again when we got confirmation it was due to cystic fibrosis and it broke most horrifically when he didn’t make it to the right half of the median, not even close.

When he was born we naturally assumed his meconium ileus was just a minor glitch in the system. Obviously we’d get through his operation and a year down the line we’d be looking back thinking how lucky we’d been, what a bullet we’d dodged. We knew meconium ileus was a common sign of cystic fibrosis but both Paul and I were healthy, we had a healthy son already, we come from large and healthy families and have enough nieces and nephews to make any Christmas present buyer shudder. The chances of us unknowingly both being carriers of the recessive cf gene and it never having shown its ugly face in the past was so slim I felt irrational for worrying.

Technically with me being Irish I had a 1 in 19 chance of being a carrier, Pauls British so he had a 1 in 25 chance. That means the chance of us both being carriers is 1 in 475. This assumes no a priori knowledge of family history, so I figured this was an overestimate in itself. Even then, statistically 3 out of 4 of our real and imagined children should be healthy; the chance of Finn having cf was down to 1 in 1900. When he was born with meconium ileus that shot his odds of having cf up to 9 in 10 (as a side point, this is not what the doctors told us at the time!). I choose to stick with my original calculation. 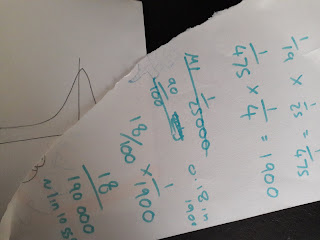 But Finn had cystic fibrosis. Sometimes people have cf and don’t even find out until they are much older. As routine screening of newborns for cf is in its infancy, there’s every chance that there are cf sufferers out there that don’t even know they have it. They might be living long healthy lives, maybe the occasional issue but nothing serious enough to point to a life-shortening genetic disease. If that’s the case the statistics being reported don’t count these people, the sample it’s based on is bias, the life-expectancy would then actually be a lot higher than we currently think. Given that Finn was going to be one of the lucky ones, he should live well beyond 47.

I know a thing or two about statistics and I suppose that should have made me a realist, in most other aspects of my life I am. I know that clinging to a single summary number for life expectancy is irrational. I know that it tells you nothing about the spread of the data. None of that matters in a children’s hospital when it’s your own son in an incubator. I convinced myself we had at least 47 years. We only had 11 weeks.

I guess all this boils down to the simple concept that bad things happen to other people, not to my family, not to my son. I still can’t get my head around how or why the system pulled such a U-turn. Of course I go through the usual ‘am I being punished for something’ thoughts but I’m not a religious person so the logic doesn’t add up. I guess that’s why my mind is constantly trying to explain it. It’s a constant internal battle between the logical and everything else in my body screaming that somethings just not right, ‘THIS ISN’T MEANT TO HAPPEN TO US!’.

Maybe I’d just rather focus on the confusion that makes my brain hurt than dealing with my broken heart.

As a final thought, the tiny bit of comfort I can draw from the statistics of my son’s death (as weird as that sounds even to me) is that because Finn died so far away from his allotted 47 years, someone else has or will have a child with cystic fibrosis that will live well beyond 47 (maybe not well beyond, it’s a median not a mean, but beyond at least). A small positive of statistical justice that I’m taking, willingly accepting the delusion.

All the above is, I guess, a clear illustration of why I need to write this down. I’m clearly insane and this is the closest thing to therapy I can handle.

Popular posts from this blog 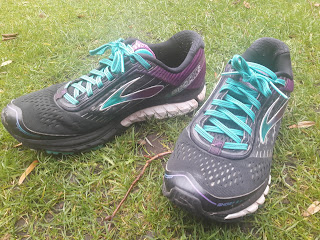 This isn't technically a new post, I actually wrote most of it 2 months after Finn died without any idea why I was writing it or what I was going to do with it. I was still in a daze but I had decided to run the Edinburgh half marathon. I know plenty of people think I was/am nuts, but it was a massive help for me. I'm viewing this as a sort of filing system so consider this filed. --------------------------------------------------------- Running for Finn More accurately my story should be ‘running through bereavement’ but to be honest, which is what I really want to do here more than anything else, I don’t feel ready to see those words in bold text quite yet. Hopefully one day that’ll come but for now let’s take it one step at a time. Finn is my son, we lost him just over 2 months ago when he was not quite 11 weeks old. He spent the entirety of his short life in hospital. Details aren’t really important so much to say he was born premature, he had complicati
Read more